A Bishop once — I will not name his see — Annoyed his clergy in the mode conventional; From pulpit shackles never set them free, And found a sin where sin was unintentional.

All pleasures ended in abuse auricular — That Bishop was so terribly particular. Though, on the whole, a wise and upright man, He sought to make of human pleasures clearances, And form his priests on that much-lauded plan Which pays undue attention to appearances.

He couldn't do good deeds without a psalm in 'em, Although, in truth, he bore away the palm in 'em.

Enraged to find a deacon at a dance, Or catch a curate at some mild frivolity, He sought by open censure to enhance Their dread of joining harmless social jollity. Yet he enjoyed (a fact of notoriety) The ordinary pleasures of society.

One evening, sitting at a pantomime (Forbidden treat to those who stood in fear of him), Roaring at jokes sans metre, sense, or rhyme, He turned, and saw immediately in rear of him — His peace of mind upsetting, and annoying it — A curate, also heartily enjoying it.

Again, 'twas Christmas Eve, and to enhance His children's pleasure in their harmless rollicking, He, like a good old fellow, stood to dance; When something checked the current of his frolicking: That curate, with a maid he treated loverly, Stood up and figured with him in the "Coverley"!

Once, yielding to an universal choice (The company's demand was an emphatic one, For the old Bishop had a glorious voice), In a quartet he joined — an operatic one — Harmless enough, though ne'er a word of grace in it; When, lo! that curate came and took the bass in it!

One day, when passing through a quiet street, He stopped awhile and joined a Punch's gathering, And chuckled more than solemn folk think meet To see that gentleman his Judy lathering; And heard, as Punch was being treated penally, That phantom curate laughing all hyaenally!

Now at a picnic, 'mid fair golden curls, Bright eyes, straw hats, bottines that fit amazingly, A croquet-bout is planned by all the girls, And he, consenting, speaks of croquet praisingly; But suddenly declines to play at all in it — The curate fiend has come to take a ball in it!

Next, when at quiet seaside village, freed From cares episcopal and ties monarchical, He grows his beard, and smokes his fragrant weed, In manner anything but hierarchical-- He sees — and fixes an unearthly stare on it — That curate's face, with half a yard of hair on it!

At length he gave a charge, and spake this word: "Vicars, your curates to enjoyment urge ye may; To check their harmless pleasuring's absurd; What laymen do without reproach, my clergy may."

He spake, and lo! at this concluding word of him, The curate vanished — no one since has heard of him. 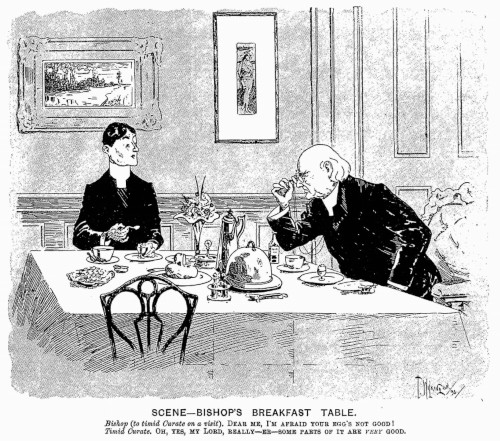 There was a man who was terribly in debt who would pray every day that he would win the lottery.

After several weeks he grew more and more desperate until God said to him, you could atleast meet me halfway and buy a ticket!

A rich man on his deathbed but he did not want to leave his money behind, so he told his wife to stuff a pillow case full of banknotes and to put in the attic so as he went up to heaven he could grab it and take it with him.

The wife did as he asked and he died soon after, the wife looked the next day and the money was still there.

"The old fool"she says"I told him I should have put it in the cellar.

It is rarely given to a clergyman to effect a complete transformation of character upon the cricket-field, as it was to one, who is now very highly esteemed in love for his works' sake, as a suffragan bishop, but he may exercise a very healthful influence.

In the case to which I refer, the parson, who frequently played cricket with his parishoners and neighbours, was surprised and grieved to notice that one of those who joined in the game had a manifest dislike of his presence.

The cause, whether some anti-clerical feeling, evoked by those agitators who tell working men that they are robbed and priest-ridden, or from some other predjudice, he never knew; but the aversion was obvious, and on one occasion was conspicuously displayed by the proprietor, who placed himself at the beginning of an over by the side, and within a few feet, of the ecclesiastic who was going to bat, and contemptuously replied to a remonstrance and a warning of danger, " I'm not afraid of nothing as the likes of you can do to me."

There came a loose half-volley to leg, and the bats-man hit it with all his strength.

His malignant adversary, anticipating results, fell just in time to the ground, or he would in all probability have been stretched there in woeful plight.

He was a miner, and shortly after this escape he was very badly hurt by an accident in the mine.

Then the clergyman, to his surprise, recived an invitation to go and see him, and after several visits he had the curiosity to inquire the motives which had dispelled his antipathy.

" Oh," said the miner, "that hit o' yourn to square leg for six converted me."